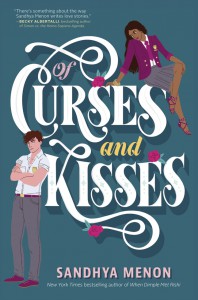 Jaya Rao and her little sister Isha are Indian princesses, teenagers who end up at an elite boarding school called St. Rosetta's International Academy in Aspen, Colorado. Aside from Jaya's usual responsibilities that involve preparing her to one day take over the role of helming the 'Imperial House of Mysuru,' Jaya is fiercely protective of her younger sister Isha, who has recently fallen victim to a tabloid campaign released by someone in the Emerson family, British aristocracy and centuries-old rivals of the Raos. It's a rivalry based on a curse and superstition, centered around a stolen ruby, the perfect setup for a fairytale. In this modern reimagining of 'Beauty and the Beast' Jaya finds out that Grey Emerson, the young Lord Northcliffe, is also at Rosetta's and Jaya vows revenge for her sister, something that will require her to get this nobleman to fall in love with her just so she can break his heart.

'Of Curses & Kisses' was the perfect YA romance novel for me right now and since I'm not a huge reader of the genre, I'm pretty selective with these reads. This one piqued my interest early because of the boarding school setting (I just couldn’t resist) and the unique matchup of the main characters due to their backgrounds and ancestry.

Menon is a natural storyteller with a light and easy way of storytelling, and this novel is a perfect example of why she is one of the most popular names in young adult romance literature.

She creates many great setups for multifaceted vibrant characters and demonstrates the struggle to choose between family and ancestry, and the desire to grow up and become autonomous. As a lead character whose motives drive the storyline, Jaya’s connection to her sister is one of her most admirable traits, but because it fuels her revenge plot that revolves around her getting close to her male ‘rival’ Grey, she has so many conflicting emotions. She is confused by her real attraction to Grey, a brooding, sympathetic character (who calls himself a ‘Beast’) who she is supposed to ‘love and leave’ as it conflicts with her duty to marry an Indian boy back home.

I was frustrated that some of the friendships seemed a little shallow and although the strict conformity of Jaya was initially irritating, these elements made more sense as the story unfurled. I was aching for her to break out of the mold that she is trapped in, which her sister Isha has been able to do since they’ve been far from their home in India. I’m really hoping that in upcoming sequels about these two at Rosetta’s, Menon includes more of Isha and allows them both to blossom further.

While this might not be ground-breaking territory, I appreciate that author Menon has written a romance that teens on the younger end of the scale can read and appreciate, along with everyone else; the intimate encounters between characters don’t feel too over the top.

Whether you are a ‘Beauty & The Beast’ fan and are looking for new life to be breathed into the classic fairytale, or you know nothing of the original, this is a fun jaunt with a modern twist to boarding school in the Colorado Rockies. It offers international flair and light romance and is perfect reading for in between heavier books.

*Thank you to Goodreads giveaways for my early copy!