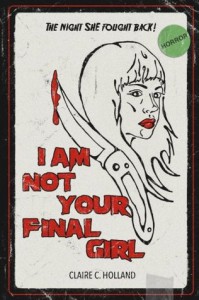 I love horror novels. I also love horror movies (probably not a secret by now, if you’ve read any of my reviews, and know of my film background). So this slim but powerful volume of poetry dedicated to the final girls of horror cinema reminded me exactly why I love them both.

Women have always played vital and shocking roles in horror movies, but in the wake of all of horror’s hapless victims, Holland’s poems pay homage to the countless survivors, warriors, and fighters among the ranks of our favorite films in the horror genre; the slasher flicks, the hauntings, the violent exorcisms.

The poems are about everyone from the unforgettable 'Carrie', to the original ‘Scream Queen’ Laurie in ‘Halloween,’ to Selena in '28 Days Later.' There may well be a high body count of women in these films, but the ones who fight and thrash and scream bloody murder, even if they don't make it to the end, are the ones who make their mark on our memories.

Claire C. Holland goes further than just to shine a spotlight on the most well-known celluloid superstars like Rosemary from Roman Polanski's 'Rosemary's Baby' (a personal favorite of mine, played by the brilliant Mia Farrow), and Sally, who is tortured and brutalized in the horrific cult classic 'Texas Chainsaw Massacre,' (played by Marilyn Burns). She has also written poems about the horror ‘heroines’ (we will call them that even if some them don't survive), of many smaller, lesser-known, and independent films.

The poems are divided into four different sections: Assault, Possession, Destruction, and Possession, to reflect the role or type of hell that horror heroine goes through on screen. Holland hits the nail on the head with depicting the pain, the brutality, violence, and sheer terror that is inflicted on these characters in their respective roles on film, and at the core of every one of them is the spirit of a girl, a woman, who isn’t going to go down without a fight. These poems make you feel a certain discomfort, a frustration, an anger at the misfortunes and acts that are inflicted on them,  and on women in general, and in so many of the poems, it’s clear that the violence or horror of the film mirrors acts that many females have  to endure in real life. My own reaction on reading these poems, especially after having seen the respective films, was very visceral; I will have to read them more times now to fully absorb them.  I also feel like Holland has made these characters even more real to me, some of whom I thought I already knew so well already, by giving them more of a ‘voice’ in this way.

I ordered the Night Worms 'Final Girls' Subscription Book Box partly because of this book being in it (along with Stephen Graham Jones' 'The Last Final Girl' and 'Tribesman' by Adam Cesare), and I'm so glad I did. I connected immediately with the poems because of my love of horror movies (I knew I would); but what I was most surprised and most affected by was the introduction by Holland, where she expresses her sentiments on the feminist stance she has taken with these poems. I was truly blown away by her powerful and heartfelt introduction. There has been a lot of talk about how this poetry collection connects to the state of ‘womanhood’ today; women NEED to read this empowering literature and poetry. If horror is not your bag of chips, this won’t be for you, BUT if you have a survivor or final girl in you, you will find these poems inspirational, horrifying, and thrilling.

**Thanks for adding a few more movies to my already long movie list, Claire C. Holland!