Brilliant autobiographical graphic novel of how to move to LA and break into the animation industry; inspiring, honest and fun 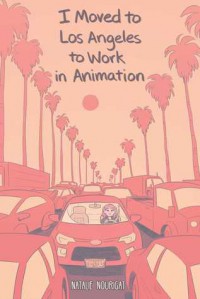 This is an autobiographical how-to graphic novel of how Natalie ‘Tally’ Nourigat made her move to LA from Portland to work in animation as a storyboard artist.

We find out from her clever storyboards, and her neatly printed text (both in superb detail), how she started out working as a comic book artist back in Portland with dreams of working down in Los Angeles, CA, and how she managed to make that daunting move and get her foot in the door.

Not only does she tell her own tale of ‘how she did it’, she reveals the pros and cons of her living in ‘La-La Land’, she helps aspiring artists and animators figure out if it’s really for them by really delving into the difficulties of the job search and realities of the animation and entertainment industry, and gives pro tips for making it from some others working in the community.

I do have to say I had a particular interest in how Natalie approached this topic (a move to LA for work in the entertainment industry), as I wrestled with this decision myself back in the late 90’s when I worked in film production.

I would’ve given my left arm (not my right one, because then I would’ve been useless doing my actual on-set job as script supervisor) for an adorable, as well as fascinating and informative graphic novel like this. At the time, I felt absolutely lost when it came to doing something like this, and making a move from Seattle to LA (and mine would have been for all freelance work, not for a regular job at a studio, although my aim was to join a union) was beyond daunting. I did make quite a few trips down to the LA-area to stay with friends, as Natalie suggests, and even took some short freelance film gigs, but social media back then was not what it is today, I didn’t drive, and I think ultimately I felt like a move was too hard back then. I also continued to have a lot of film work up here in Seattle. Where were you when I needed you, Tally?

What Natalie has done with this graphic novel though, has taken a lot of that fear (something I recognize) and made the process seem so much less daunting and anxiety-inducing than it would otherwise be. She is honest but upbeat, positive but realistic. LA isn’t for everyone, even if it’s the place of your dreams, and even if you’re talented.

But this will give you a brilliant outline to follow should you give it a go (it would work quite well for anyone searching for an entertainment studio job or making a move to LA for certain steady film/TV jobs).

BOOM! Box Studios might be on to something here. Maybe this can be a ‘thing’: I can envision a whole series of these, and if these graphic novels were suggested by career guidance counselors for young adults, can you imagine the enthusiasm?! My goodness!

Ultimately, this kept me engaged all the way through, and I’m definitely not trying to find a job in feature animation! But this is superb.

*One thing that kept coming up that I couldn’t stress more and I’m so glad was included: a lot of success and getting work is due to luck and timing. So so true.