‘Chilling Adventures’ of Sabrina’ is the perfect graphic novel read for Halloween; this is full-on retro HORROR with a capital H 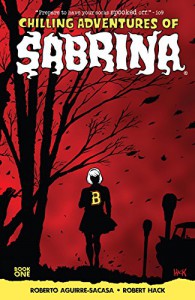 I fancied some ‘light’ horror and since a whole bunch of my pals on Litsy have been reaching for graphic novels this Halloween season, I thought I’d try this. And don’t be fooled: this version of Sabrina the Teenage Witch’ is most definitely HORROR with a capital H. If you are looking for something along the lines of what you would find on the CW when Sabrina was a sitcom, this is NOT it. Forget PG-spooky, it’s definitely the other end of the horror spectrum: S for Sabrina is now Scary.

Set back in the 1960’s, Sabrina is the illicit lovechild of a warlock called Edward Spellman, and a mortal named Diana, and she is raised by her aunts Zelda and Hilda (no news there). Sabrina is approaching her 16th birthday, which means she can become a fully-fledged witch, and pledge herself to the Dark Lord*. Complicating things are having a mortal boyfriend, and deciding if she can kill living animals on the spot. More fun ensues when Madam Satan shows up in town, and she is none too happy about having been sidelined by Edward for Sabrina’s mom. Enough said.

There are all sorts of horror goodies in this jumbo comic edition (it contains comics 1-5 of the ‘Chilling Adventures’, and in the back, has the variants that were printed with the different covers). The fabulous intro by the author Roberto Aguirre-Sacasa lays it all out for the reader, pointing out that the adventures are like ‘Rosemary’s Baby’, plus ‘The Exorcist’, ‘The Omen’, and Arthur Miller’s ‘The Crucible’ all rolled together. It’s ALL in here. As well as Ray Bradbury’s ‘Something Wicked This Way Comes’, zombies, and vengeance against men who have picked up innocent hitchhiking women.

The retro style of illustration harks back to comics of decades ago, and Roberto explains it’s because he wanted them to have the feel of a ‘period piece’, and it all works flawlessly. There’s plenty of dark humor (very dark), a definite feel of classic horror influencing every frame, and it’s actually no wonder that it’s being adapted into a show on Netflix. I hope they keep it just as gory, retro, and bloody though...

I’ll be continuing the series!

*To any heathens asking: no, REAL witches do NOT pledge themselves to ‘Satan’ or the ‘Dark Lord’.

**You can find this omnibus edition on hoopla!