Heavy metal horror masterpiece that is sure to become a cult classic; another hit from Grady Hendrix 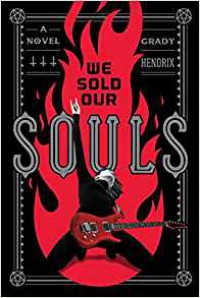 ‘We Sold Our Souls’ is one HELL of a ride. Grady Hendrix, King of horror at Quirk Books, has written a heavy metal masterpiece with a female lead guitarist, Kris Pulaski, as its star.
Less classic horror this time (his previous books are ‘Horrorstör’, and ‘My Best Friend’s Exorcism’), Hendrix has laden ‘Souls’ with conspiracy theory and real life horrors.

Kris Pulaski was in a heavy metal band called Dürt Würk two decades ago and they were on the brink of success when the lead singer Terry Hunt ripped the band apart and left to start his solo career. And it seems Terry’s rise to success was at the cost of selling the band’s souls.
That’s right, he sold their souls for rock’n’roll…or in this case, heavy metal.

Kris’ pitiful present day existence is working at the reception of a Best Western, and if you can stomach the ‘Welcome To Hell’ chapter (good horror always comes at the cost of reading things that make your stomach turn), then you can follow Kris on her journey as she gets whisked from Pennsylvania to a Satanic rehab center, and then across the country again to grimy Las Vegas. Years of grueling, crazy, exciting, challenging (to say the least), and often nasty experiences on the road with the band, were nothing compared to this trip, and it seems like all Kris’ heavy metal years were preparation and toughened her up. The journey to Las Vegas is overwhelming, but Kris has a mission she can’t ignore. There’s also a whole host of colorful characters along the way, but I do have to wonder if Hendrix has a thing against UPS (you will see what I mean when you read the book).

The greatest thing about this book is that Hendrix has chosen to write ‘Souls’ with a female protagonist. Not just that: a kickass, middle-aged (even though I hate that word, because that’s what I am now, I suppose), female as its lead. And she plays the guitar like a certain other Hendrix. She doesn’t take any bull from anyone and doesn’t stop fighting back once she starts on her new road trip.

While it seems as though she has given up with her hotel job, the revelation that she must stop her old bandmate Terry Hunt, lights a fire in Kris, and the book has that vibe of ‘don’t give up, don’t let the system win, don’t let the bullies push you’. That’s highly clear in the messages of conspiracy theory, our paranoia-laden country, and how culture is selling itself (its soul) particularly out to cell phones and shallow marketing. Reading the book will give you a greater sense of the way the conspiracy theory works in ‘Souls’ - I’m kind of at a loss as how to explain the genius behind how it’s woven in - but Hendrix has cleverly used snippets of radio and newspaper to show how ‘news’ travels and information spreads. This has always been the way conspiracy theories spread and this underbelly of the book is fascinating.

If you don’t know all the music in the book, this may be a little daunting, as there are a lot of heavy metal and music references, but I think if you have even the remote interest in or knowledge of decades old music such as Black Sabbath and Slayer, and remember the days when everyone thought that heavy metal listeners were devil worshipers, you will appreciate what Hendrix is doing here (and no you don’t have to actually like the music). Trigger warnings for sexual assault and creepy crawlies; this is definitely rated R.

Hendrix is an undeniable force in pop culture literature and has written an unforgettable book, one that’s not for everyone, but will be a cult classic, but not like any of the schlock he writes about in his awesome ‘Paperbacks from Hell’. No one writes like this guy; ‘We Sold Our Souls’ is funny, gross, complex, and a wonderful blend of horror, pop culture, conspiracy theory, and is infused with a heavy dose of music history. Only Grady Hendrix could have done that.

**I'm really lucky because this Friday I get to meet Grady here in Seattle at his book signing and I get to have my big stack of books signed.

*Kudos to Doogie Horner again, for another excellent book cover design for Grady. It's worth noting that the hardcover of this book has beautiful black ink-sprayed pages. 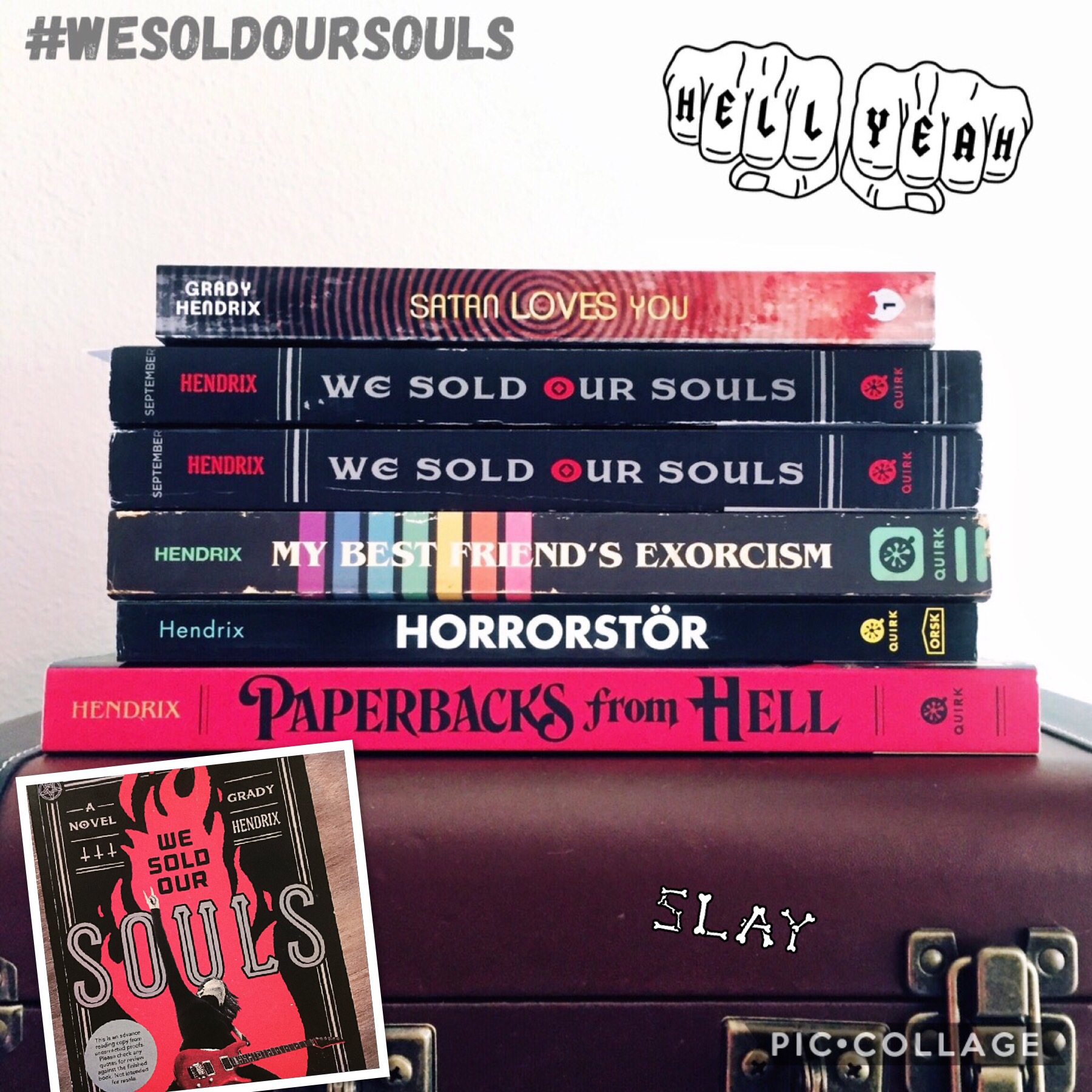 What an amazing ‘signing’. To anyone who gets to go to one of the signings on this book tour: Grady will blow your mind with the presentation he has ready for you; I wish I’d been prepared and been able to record it or something, so I could listen to it again (you hear/see that, Grady?).
The whole ‘secret history’ behind heavy metal and how it has rotted so many young minds (aka the wonderful conspiracy theories that set WSOS in motion) is the basis for Grady’s brilliant ‘lecture’, along with a slideshow and I wish I’d at least taken notes, but I chuckled too much to do that. It was the most funny, inspiring, thoughtful signing I’ve been to yet.

THANK YOU TO GRADY for revealing the personal background behind writing this book in particular; I really appreciated your message at the end, you have so much heart, especially for a guy who writes some of my favorite books which are complete with things like people getting their scalps ripped off, beetles crawling down their shirts, and high schoolers needing exorcisms. Plus you will say ‘fuck’ a lot right near the children’s department in the bookstore and do the ‘voices’ of the members of KISS.
And I have NO idea how you have the energy that you do (you delivered about 20-25 pages at cutthroat speed), especially since I’m someone who has zero energy most of the time, thanks to MS.
Us Seattlites apologize for the death of metal circa 1991 when Nirvana et al burst onto the scene (I thought it was funny that you started your tour here*), but you must admit jeans are way more comfortable than leather pants, so that was a godsend. I’d love to hear your take on whether that was a conspiracy itself.

So, thank you for coming and signing my massive stack of books, for your presentation, and for your writing genius. Thank you to librarians for buying secret copies of books for kids like a certain one did for you.
You rock.

*We would like to reiterate that we did indeed have a very hot and sunny summer here this year (again) in Seattle, and now that  it’s raining we are actually all quite relieved. Sorry you had to experience it for your trip though. Make sure you come back for your next book.