Ruth Ware has done it again with this gothic mystery; Agatha Christie would be proud! 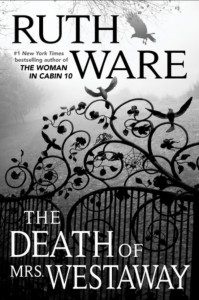 Ruth Ware has done it again! 'The Death of Mrs. Westaway' is even better than her last book, 'The Lying Game', and for me, that's saying quite a bit. I completely fell for Ware's writing and storytelling with that book (bonus points were given for taking me back to my boarding school days in Sussex), and I knew I had found my new favorite mystery author.

'The Death of Mrs. Westaway' takes the reader to Sussex again, this time to 'sunny' Brighton, where Hal - Harriet Westaway - has a job as a tarot card reader on the pier, which is what her mother used to do before she was killed suddenly by a car, leaving her alone and scraping by. As the bills are piling up and the dodgy 'bill-collector' keeps popping up, so does a letter saying that she has inherited a large sum of money by a mysterious and very old Mrs. Westaway. Although Hal realizes there is some mistake with the connection to her and her mother, she decides to go to the funeral at the Trespassen House out by Penzance. She wants a chance at just a bit of that money, and to figure out some family secrets that she feels her mum left behind.

Now that's a very rough, short synopsis. Since I'm from England, I have the fortune of reading Ruth Ware's books and imagining the English countryside, the Brighton pier, the foggy desolation around the abandoned mansion that is Trespassen House. But what is so glorious about Ware's writing is that she is able to create such atmosphere and mood, that she can conjure up imagery (I'm pretty sure) so effectively that it envelopes the story entirely, without having had to have been over there. In 'Westaway', the mansion and the grounds basically become a character of their own, and the gothic and dark images of Trespassen House are so well-written they come alive.

What also makes this novel so successful are the other family members make for a great ensemble, the secrets that swirl around slowly reveal themselves throughout the novel at the perfect pace, and Ware shows the reader what happened in the past without seeming contrived. It all fit so perfectly. And I never saw that ending coming! My biggest complaint was that I read it too quickly because once I picked the book up, I couldn't put it down.

It’s no coincidence that the current ‘Mistress Of Mystery’ has been so heavily influenced by Agatha Christie (and Daphne du Maurier) because Ware feels like the Christie of today.