‘VOX’ is the kind of dystopia that feels unnerving because it feels so familiar; hints of Atwood and Orwell, in this utterly compulsive read 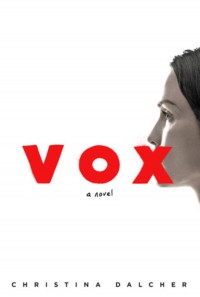 This was so good that it was one of those books I just could not put down. Being thrown into a dystopian nightmare that doesn’t seem so far-fetched is thoroughly unnerving because it’s feels entirely too familiar. We’ve read and seen a lot of imagined dystopias lately where women are quite brutally subjugated, but reading ‘VOX’ felt more subtle and thus a little more frightening.

‘VOX’ centers around Dr. Jean McClellan, a former doctor and professor who studied aphasia (loss of speech), and her family, and we quickly see how the new Government ‘rules’, and the ‘Pure’ Movement have affected her family. ‘Bracelets’ have been placed on all females’ wrists, and they track words spoken each day; the word counter allows them only 100 words in 24 hours and beyond that, they’ll receive electric shocks. Jean’s daughter has got to the point to where she barely speaks at all. Women can’t work anymore, use birth control, read, write, spend their own money; men have the ultimate say in everything. There are also stiff punishments for extramarital and premarital sex, even exiling and humiliating teenagers on public TV.

Jean is eventually called up by the very Government that has put all of this in place, for her help and expertise. The President’s brother suddenly has lost his ability to talk after an accident and they need her help, as one of the top experts in the country on aphasia. Her rather meek and quiet husband, who works for the Government, encourages her to do it, and she’s motivated by the deal of having her daughter’s word counter removed.

Does this all seem too convenient? Maybe. There are a few plot points that work out a little too easily. But it’s compulsive reading. As well as being one of those books that doesn’t feel so far away from being our truth, it’s hard not feel like this could happen to your family.
That makes it successful.

And the fact that we are drawn in by all the hints of other great dystopian novels written by Margaret Atwood, Naomi Alderman (just recently), or even George Orwell, so be it. There are some great action scenes in here, grand questions about how we should be living our lives, a huge argument that is playing now with the ‘Pure Movement’ concept (getting back to basics, and the religious right), and that is really why feel like Dalcher has hit the nail on the head with this. Great read!

*Thank you Penguin for my First Read! Having an early digital copy has not affected my ability to give an honest review.