A dystopian novel that really seemed like a glimpse into the future: global warming has taken its toll at last, but is there any slice of hope? Fascinating read! 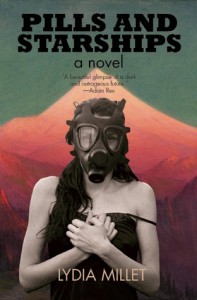 I really enjoyed this ‘glimpse into the future’, because while this is indeed a dystopian novel, it sure seemed like I was reading a real journal (that of the main character, Nat, who writes it in the week leading up to her parent’s planned death). I chose this book for a group read on Litsy, where we send a book, marked up with our notes, along to the next person, and the other three do the same with their picks, so that we have a book mailing circle.
This first caught my eye in my local indie bookstore, where it had a recommendation tag (and an awesome cover), and the premise is this: teen siblings named Nat and Sam, accompany their parents to Hawaii who together have decided to spend their ‘Final Week’ before the contract for their deaths is carried out. Nat and Sam are long to say their goodbyes. That’s right, in this imagined future, where global warming has finally made the world so unbearable and everyone gets through their days by taking moodpharms (ie happy pills because the world is so depressing), you can take out a contract for your death when you get old enough, and you can pay for assisted suicide on the Big Island (it’s not illegal anymore and quite encouraged, and rather embraced).
The world that is in this dystopian future is so sadly believable that I read it as if I had some sort of special peek into what was going to happen if we continued with what we are already doing to this planet, and I have a feeling author Lydia Millet has distinct opinions on what’s to blame for the ruin to come (I tended to agree!); it’s not hard to imagine much of our wildlife gone, whole states like Florida under water, a whole garbage vortex in the ocean....
I can’t say too much about the plot but this was a great, thought-provoking, interesting story, and I will say there was some hope at the end. It’s not a long book but it packs in a lot to think about. I hope for everyone reading it, that it makes them think a little bit more about their carbon footprint and about how we really are lucky to have this Earth.
*And I don’t care too much about a future without pet cats. That will be a sad day.