Both beautiful and terrifying, this is a standout in the crowded YA fantasy genre 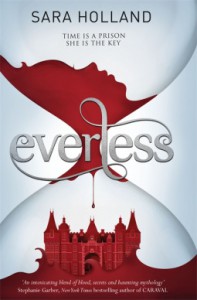 'Everless' took me totally by surprise. There are quite a lot of young adult fantasy novels being released with beautiful cover designs to draw you in (even though I want to get my hands on the UK cover in this case, over the US one), so I think it's starting to get harder to stand out in this genre, at least on the bookshelf. But I dove into 'Everless' without too many preconceptions and once I started the book, I barely came up for air.

In the land of Sempera, time is money, and blood is currency, meaning blood-iron can be sold and turned into coins for the very things that people need to survive: rent and food. It is all-consuming and cause for corruption - the wealthy just drop coins into their tea to look younger, and people go to get their blood drawn to satisfy their debts, as well as having their blood taken from them as punishment or stolen.

This whole concept aside (which initially seemed confusing to me but then made total sense!), the main character who drives the tale is Jules, and I gravitated towards her from the beginning. I already feel like I'm saying too much, but she must leave her beloved father to go back to work and live at 'Everless' where the Gerlings, the Sempera royalty, reside, to understand the secrets that reside within, and to try and support her dying father, against his wishes. I don't dare say any more about the plot, but I will say that this book just flows because of Holland's great writing, her fairytale world filed with fascinating characters, and I couldn't put the book down.

Sara Holland has created a world so enthralling, as beautiful as it is terrifying, and it's hard not be absorbed in this tale filled with secrets, danger, and adventure. Read this book!
*I can't believe I'm going to have to wait for her to write the next one now!! The ending really left us with a cliffhanger!