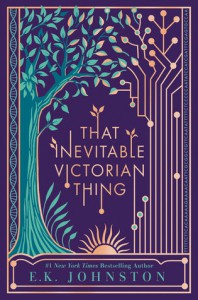 First of all, I want to say I was absolutely thrilled to read an early galley of this book, and even with knowing basically nothing about it, I knew immediately from the cover, the title, and a brief synopsis, that I had to read it, and I did...inevitably.
The story took a LONG time to warm up (which seems to ironically mirror the real cold, stoic Victorians of our own past), and it may have been a good half way through the book before I got truly invested. Johnston gives the reader this fascinating alternate world, one that was the main reason I wanted to continue to read on. Being a Brit out here in the States, a world where the British Empire was preserved, makes for a very different history lesson...!
But that was exactly what I wanted so much more of - how did all of that happen? How do this society develop? There is a great deal of fascinating world-building that revolves around ideas of gender identity, religion, customs, and the use of new technology, but the book feels like too much of an introduction to it all; I needed to know more than what I got from the added maps and letters too, although I liked these additions. The pacing was a little jumpy, and the ending seemed rather abrupt, leaving the feeling that would be a sequel to come, as the tale of the three main characters seemed to just begin at the end of the book. It was by that point that I wanted to really know how on earth things would work! There is a great concept here and I think it really could have been fleshed out with so much more detail and character development. The next one maybe?
Tweet